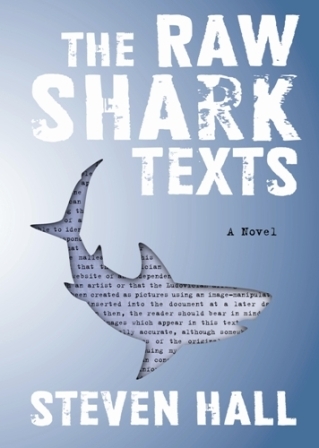 There’s something about this book that defies explanation. Something slightly…off about it. Not in a bad way mind you, but rather in such a manner that once you’ve read it you can’t quite define what it is you’ve just experienced.

The setup for the book is this: a man wakes up with no memory and a note from an individual who describes himself as The First Eric Sanderson. Through a series of clues left by his previous self, the current iteration of Eric Sanderson learns that his mind is affected by a strange disorder that causes his memory to wipe itself clean from time to time.

If you think this sounds interesting, trust me, we haven’t even gotten to the cool stuff yet.

As Eric receives more and more clues he starts to realize something strange about the world. There is something hunting him, something not quite real, and yet altogether deadly. A creature made of ideas searching through the conceptual universe, trying to devour Eric’s memories.

Was that last sentence too much for you? Did it make you sit up and go “Huh? What did he just say?” Well this is where the book really gets interesting.

The premise of the book is that the world is not entirely real, but rather is constructed out of the concepts and ideas that live in our minds. For instance, when you think the word “couch” there is something that comes to your mind. The word is linked to the idea in your mind. There is no reality beyond our collective perception of reality.

Too confusing? Let me try it this way: it’s like the Matrix, but there are books instead of computers. Sort of.

There’s a bit of a meta flavor to this concept too, because in the book reality really is made out of concepts. Fiction depends on us being able to translate dead words into living situations in our minds, so within the context of the story itself the premise makes perfect sense.

The ultimate villain in the story is a thing that used to be a man named Mycroft Ward. Mycroft Ward found a way to manually transfer his consciousness into the mind of another. I would explain what that means, but I think it would make more sense if you just read it for yourself. By the time Eric Sanderson hears about him, Mycroft Ward’s consciousness has become obsessed with survival and his trying to download itself into every mind on the planet.

I’ve tried to give you a picture of what this book is like, but the truth is I can’t even begin to scratch the surface of all the wonders it contains. It has the uncanny ability to create imagery that sticks in your mind like bur. The red file cabinet, biro world, the Ludovician, they all manage to take a hold on your memories.

If you haven’t figured it out by now, this book is not for the casual reader. This book will make you think. It will tickle at the back of your brain and subtly change the way you look at the world.

And that, I think, is the best thing I can say about any book.

On the Imprisonment of Ideas

I knew what I was going to write this blog about. I swear I did. It was in my head clear as a bell yesterday afternoon. It was a good blog post too. Seriously, you have no idea what you’re missing.

But instead you’re reading this. Why? Because I woke up this morning and I couldn’t remember it. I sat around for a while waiting for it to come back. I read some other blogs thinking I might find some trigger for my messed up memory. But I ended up with nuthin’. Nada. Blog idea to the zeroth power.

I’m not the only one either. Some of you have commented here in the past and said, “So Albert, I’m trying to do this blog thing, and I have all these great ideas, only when I get back to my computer I can’t seem to remember any of them.” I think I had some advice for you at the time. Maybe it could help me out too. What was it again? Oh, yeah.

Ideas are everywhere. In the store, at your house, sometimes you’ll even hit one when you’re driving down the road. They make an awful splatter don’t they?

But ideas are visitors. They don’t tend to hang around forever. You need to capture them, drag them flapping and screaming out of your head and cage them up in a place where you can come back to them later.

For a long time I used a small notebook for this. It was something small that I could keep in my back pocket with a stub of a pencil and whenever I had an idea for a story or a blog post or whatever I could take a minute to jot it down.

Lately though I’ve been tinkering with a tool called Evernote. Evernote is a program that works just like a notebook, and the cool part about it is, it syncs to the internet from both my phone and my computer so I can access it wherever I’m at.

Of course it doesn’t work if I don’t use it.

Ideas are the most valuable things we have. Why? Because they’re unique and special to us. If we leave them lying around in our brains they’re liable to get lost.

Otherwise one day you’ll end up like me, writing a blog post to remind yourself to write your blog post ideas down. And that’s just meta.

A man I know and respect once said, “The only true cardinal sin remaining in today’s culture is the sin of boredom.” And it’s true. We’ve built a society that is addicted to entertainment.

To a certain point that isn’t all bad. We’re human. We need something more than basic nutrition and shelter to meet our needs. Good entertainment can serve to feed the soul like food feeds the body.

But when I look around me at all the things we’ve built up to distract us, all the noise and pretty colors set up like walls to keep the silence out, it makes me wonder. What if it were all gone? What if we were left alone with ourselves?

I decided to do an experiment to find out.

I turned off my computer, I shut off all my cells phone’s various apps, and I set the timer for thirty minutes. Then I sat down in my writing chair, and I waited.

At first there was a kind of panic that swept over me. I remember wondering “What was I thinking? Half an hour of just sitting and thinking? This is stupid, this is pointless. Bring me back my playthings!”

But gradually that moment passed, and I was left with…silence. I started thinking. I didn’t have a plan or any kind of goal. I just wanted to know what my mind could accomplish in half an hour with no distractions.

I let my thoughts run over the edits I had planned for my story The Mulch Pile. After a while I drifted on to more abstract thoughts: philosophy, theology, psychology. And before I knew it the alarm clock went off and I went back about my daily routine.

What was the end result? I’d love to tell you I experienced some kind of deep revelation, or came to some great personal understanding, but none of those things are true. But I did get quite a bit of advance planning done for my revisions and edits, and I found my mind wandering through some interesting labyrinths of thought and memory.

In the end I’m glad I did it. I think its important for all of us to remember who we are outside of all the distractions and diversions we surround ourselves with. I wonder if far too often we let the noise of entertainment and social media drown out the deeper and more meaningful messages in our lives.

I know many of you have busy days and carving out time to do something so seemingly pointless as sitting and thinking with no distractions may not come easily for you. But I urge you to try it, at least once. Dare to strip away all the noise, and you may find something meaningful waiting in the silence.